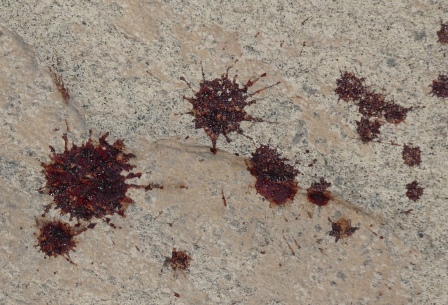 It was 8.35am and in the sleepy suburb of Disneyville, the local council offices had just opened for business. Outside in the forecourt a small crowd had gathered, transfixed by the sight of bloodstains on the pavement. Aghast, they stared at the trail of bloody splashes that led along the footpath and ended abruptly at a parked car, its passenger door ajar.

Meanwhile the adjacent public car park was bustling with life. It was the last day to pay the council rates and ratepayers were slamming car doors, looking decidedly surly as they walked over to see what was happening, for nobody had been impressed by yet another rate rise.

‘What’s up?’ called Zoë Naylor, the council’s chief executive officer, adjusting the cuffs of her stylish black shirt as she elbowed her way through the group of bystanders. ‘Hey! Why is Joe parked in the mayoral spot?’ she asked. ‘He’s no longer the mayor.’

But her voice was drowned out by the shriek of fast-approaching sirens.

There was a collective gasp. It was Councillor Quimby’s car? The situation was becoming more interesting by the minute.

Two police cars screeched to a halt in the car park. A burly man in a brown suit bounded out of the first car, flashed a badge, introduced himself as Inspector Rex, glanced about and came straight to the point.

‘We don’t know,’ chorused the gathering.

Inspector Rex looked a little disappointed. ‘So who was first on the scene?’

‘Me, I guess,’ volunteered a young woman in a quavery voice. She hadn’t been the receptionist for very long and obviously this hadn’t been in her job description.

In the meantime, two policewomen in uniform were rolling out metres of blue and white bunting, as the policemen strode off to search the adjoining parkland.

‘Can you please tell me what you observed when you arrived?’ Inspector Rex asked.

‘Just what you can see now.’ The receptionist shrugged her shoulders and gestured towards the open car door and the bloodstains. ‘That’s it.’

Evidently dissatisfied with this account, several spectators simultaneously leapt in with their own observations.

‘The killer must have slipped up behind—’

‘This is just like an episode in Underbelly when—’

But Inspector Rex interrupted. ‘Does anyone know who owns the car?’

‘Councillor Joe Quimby,’ answered Ms Naylor, taking charge of the situation, as usual. ‘He really shouldn’t park in the mayoral car space because he’s no longer the mayor. I’ve cautioned him many times.’

‘Madam, I’m not here to issue a parking infringement. When was Councillor Quimby last seen alive?’

The crowd craned in eagerly and somebody began passing around a large packet of potato chips.

Ms Naylor, unabashed by the reprimand, replied, ‘Last night. We were all at our regular council meeting in the chambers. Joe, of course, was in attendance. Actually, he’s one of the few who never misses.’

‘Was anybody yelling at him or looking aggressive?’

‘Of course. It was a council meeting,’ explained Ms Naylor, at which a few people in the audience snickered. ‘It’s not a picnic here,’ she continued. ‘Residents get very angry.’

‘Was there anyone last night who stood out as being particularly angry?’

She thought for a moment, before replying. ‘Apart from the residents in Ramsay Street who are complaining about the latest neighbourhood renewal project and the parents whose play school has been closed . . . no, there was nobody.’

‘But is there any reason why somebody may hold a special grudge against Councillor Quimby?’

On this score, various bystanders were quick to respond.

‘He put a stop to our hard-rubbish collection!’ someone shouted.

Another called out, ‘He doesn’t care about graffiti!’

‘I couldn’t get a permit for my shed and although he’s my ward councillor, he refused to help!’

‘There’s no mobile reception where I live.’

‘My rates have skyrocketed and what do we get for them? Absolutely nothing!’

At this, everyone clapped enthusiastically.

‘The traffic is appalling!’

‘Where are all the jobs?’

‘This council hasn’t done anything to address the issue of climate change,’ said a bearded man from the back of the mob.

But she just rolled her eyes resignedly. She’d heard it all before.

At this point, the mayor in the enormous mayoral car attempted to turn into the area, only to find his way blocked by police tape. As blasting his horn brought no response, he sped off to look for parking elsewhere.

‘What I’m trying to ascertain,’ snarled Inspector Rex, showing all his teeth, ‘is whether there is one individual who had enough of a motive to murder Councillor Quimby.’

While everyone pondered this, the mayor appeared on foot, straightening his tie as he approached.

‘Why the hell can’t I get into the car park?’ he roared. ‘And why is Joe’s car parked in my spot again? I told him last night that if I caught him here one more time, I’d kill him!’

The crowd froze. The mayor had been a councillor for two consecutive terms and was notorious for his lack of tact. Was this just another one of his characteristically inopportune blunders, many wondered, or was he really the murderer?

Finally he noticed the policeman and introduced himself. ‘I’m the mayor and you are Sergeant . . .?’ he asked.

But Inspector Rex never got to reply, for around the corner came Councillor Joe Quimby, very much alive. His head was covered in a large bandage and dried blood was spattered across the shoulders of his grey suit.

The spectators murmured their astonishment, except for the mayor who immediately yelled, ‘Joe, we’ve got something to settle here, once and for all!’

‘What the hell is your problem now?’ retorted Councillor Quimby.

But Ms Naylor quickly interceded. ‘Where have you been, Joe?’

‘Hospital, to get stitched up. I sliced my head open on the car door when I was loading in all my papers and files. The gash was bleeding so badly that I couldn’t drive and I had to call an ambulance. Then when I got there, the emergency department was full, which meant that I had to wait for hours. I’ve been there all night.’

With some embarrassment, the ratepayers began to hunt in their pockets and handbags for their forgotten rate notices. Inspector Rex phoned his policemen to return and the policewomen sprang into action and quickly pulled down the bunting.

However the mayor was not so easily appeased and turned to face his rival. ‘Never again park in my space! Do I make myself clear?’ he threatened, shaking his fist.

‘You don’t deserve prime parking, mate,’ Councillor Quimby countered. ‘In fact, you shouldn’t be on council at all. You only got elected because you said you were going to fix the economy.’

The two men glared ferociously at each other, chins jutting.

‘There’s nothing wrong with that – the economy needed fixing.’

‘But you don’t control the economy! Councillors don’t have that kind of power.’

‘People aren’t interested in such details,’ the mayor scoffed. ‘They just want to know that the economy is fixed.’

‘And what makes you so great? You only got voted in because of your celebrity status as a has-been sports hero.’

‘Listen, I was a brilliant footballer and still could be, if I hadn’t had problems with my hamstrings.’

‘Stop this immediately, gentlemen!’ Zoë Naylor commanded, once again calling the gladiators to order. ‘This is highly inappropriate!’ She gestured meaningfully towards the residents. ‘Joe, go and move your car, and you,’ she said, turning to the mayor, ‘are late for your meeting with the managers.’

Both men scowled but followed her advice, slinking off in different directions. The bystanders found their rate notices and walked reluctantly into the council building to pay the cashier.

‘I think the mayor is a much better councillor than Quimby,’ somebody said as they all took their places in a long queue.

‘Don’t be ridiculous!’ someone else snapped.

‘Those two councillors are as bad as each other,’ muttered a man near the back of the line. ‘There’s nothing to pick between them.’

‘Never mind,’ a young woman giggled. ‘We’ll vote them both out at the next election.’

‘Yes, but will the next lot be any better?’

There was a collective sigh at this and everyone shuffled forward in single file.

One of the council staff turned on a huge plasma TV, broadcasting news footage of the latest battle between Jewish settlers and Palestinians in Gaza. There was the sound of screaming as several Palestinian teenagers were shot dead.

‘Hey, we need the channel changed. We can’t have the news on – there are children present!’ shouted one mother, pointing to her baby in the pram.

The remote was quickly located and Survivor came on instead. A hush descended as everyone in the queue faced the TV screen, completely enthralled, for the reality show was extremely popular. Besides, it was a brand new season.