A short story about a dystopian future world, written by Liezl Shnookal 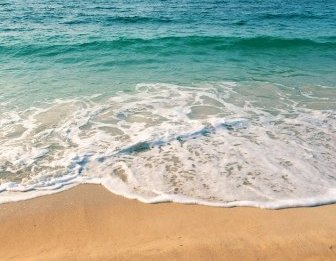 Resplendent in her turquoise Armani neck-to-ankle swimsuit, Charlotte splashed out of the sea, removed her Gucci goggles and furtively scanned the beach. There was no sign of a Recreational Health and Safety Officer so the young woman quickly rolled up the sleeves and legs of her swimsuit, shook out her luxurious Louis Vuitton towel over the sand and with a sigh, delicately positioned herself face down upon it. She knew what she was doing was illegal and that she should be using her St Tropez self-tanning spray, but sometimes she found the urge to sunbake simply irresistible. Charlotte mentally selected ambient music on her Apple Me-pod as she hollowed a diminutive nest for her chin, revelling in the warmth of the sun on her exposed skin.

Further up the beach, there was a long queue of women patiently waiting their turn to get inside the Beauty Bubble. The gymnasium area was full to capacity, every piece of equipment in motion. The master on-line shopper classes too were doing good business, with the merchandise scrutinised on 3D Me-max screens and personal trainers at the ready for the novices. Even the makeover workshops were jam-packed, including the special sessions on surgery options and make-up techniques to minimise the appearance of post-operative scars. The power station was humming, generating enough electricity for all, as well as for the mini desalination plant that was needed for the showers and spas. Everywhere was a hive of healthy activity.

Charlotte languorously turned over on her towel and promised herself that she would bake for only another five minutes before driving to the gym.

‘Excuse me, but have you . . .’ a voice suddenly whispered beside her.

Charlotte leapt to her feet to discover an elderly woman in an even more ancient sunhat.

‘Sorry to disturb you but I was just wondering if you knew how regularly this beach is patrolled.’

Furious, Charlotte glared at her before plumping down again on her towel.

‘Go away, you’re casting a shadow,’ she snapped and withdrew behind her eyelids.

Someone jogging along the beach informed the old woman that the Recreational Health and Safety Officer had visited half an hour earlier and was unlikely to return for a while. The elderly woman immediately ripped off the nicotine patch she was wearing, took out a contraband packet of cigarettes and began to smoke.

It had only been two months since the Healthy Behaviours Act had been passed, which had banned all unhealthy and unsafe activities, and there were clearly still some small adjustment challenges. Everyone had undergone a personalised re-education program through their Me-pods, plus the Fossil Fuel Industry’s Energy and Wellbeing Department had tweeted a major advertising campaign. Yet despite all attempts to embed this message, some individuals persisted in engaging in prohibited pursuits such as smoking and sunbaking. All the experts agreed that the compliance rate was only 42 per cent.

However, even here there were positives to be found: employment had been significantly boosted by the hiring of thousands of Recreational Health and Safety Officers who patrolled public places in search of lawbreakers. In addition, revenue raised by the fines went straight into the tax-free bank accounts of the pharmaceutical companies, which in turn donated large sums of money to the two major political parties. It was a win/win situation – all the way around.

Meanwhile Charlotte was contentedly tapping her toe in time to the music playing on her Me-pod. All of a sudden Big Sister displaced her song with an announcement.

‘Good afternoon, consumers! We apologise once again that all shops have been closed today for extra beautification work, but we hope that you are managing to cope through this twenty-four-hour crisis cycle. And to make amends for any inconvenience this may have caused, we are now offering you a really special treat! So look out for a surprise coming your way today!’ Big Sister chortled, before signing off with her usual ‘I’ll be baaaaack!’

Although Charlotte didn’t much like surprises, unless they were presents that cost over a thousand dollars, she opened her eyes and sat up. To her dismay, she became aware that the sun was making her skin redden hideously and so she quickly rolled down the sleeves and legs of her swimsuit. Simultaneously Charlotte noticed a sudden gust of wind agitating a pile of nearby seaweed, which then began assembling itself. Long tendrils of kelp wove together to become hair, abalone shells spun into position as ears, cowries became eyes, and short curls of brown seaweed formed a vaguely female shape.

‘What? Only two?’ Charlotte pouted. ‘You think I don’t know my rights? I’m entitled to three wishes, like in the fairy stories on my Kindle Oasis.’

But the Weedy Sea Hag began to vanish.

The Weedy Sea Hag shimmered back.

‘Your wishes will be immediately entered into the central register. Everyone has the opportunity to vote. The two that attract the most number of votes will be granted,’ she explained.

‘My first wish,’ the young woman said, ‘is a no-brainer. I want bigger breasts.’

‘How many others do you think are going to vote for your breasts?’ laughed the Weedy Sea Hag.

Charlotte sulked momentarily before continuing, ‘I’d really like to be slimmer, but how can . . . I know, my second wish is that all Me-Gen girls lose enough weight to drop down a dress size. That’ll do it!’ Charlotte beamed with pleasure at her cleverness.

At that moment a hologram of her boyfriend appeared and with a wave of her hand, Charlotte abruptly dismissed the Weedy Sea Hag.

‘I’d love to, baby, but some of the guys are just filling up the Eurocopter Helisurfer with diesel and we’re about to go surf-skipping. How about we meet later today at Monsanto’s Restaurant?’

‘Will you be paying?’ she fretted. ‘Sorry, but I’ve maxed out all my credit cards this week.’

‘You know I always pay, baby.’

‘And if that new Italian celebrity chef is on tonight, we can have the free-range beef steak with the especially flavoursome genetically modified salad.’

That settled and arrangements made, Henry headed off for his water-sports session. Charlotte set to tweeting her friends about her impending date and what she was planning to wear, eat and say. She then stood up and began to collect her things. She was going to have to hurry to fit in a gym session before getting ready to go out. However, another Big Sister announcement came over her Me-pod.

‘The votes have been counted on our instantaneous mega-calculator. The two wishes that received the most number of votes have now been locked in. They are . . . are you ready? Okay . . . the first wish to be granted is this: ‘the federal government will immediately unfriend the fossil fuel industry, and our nation’s climate policy is going to be determined instead by climate scientists and environmental groups’ . . . Whatever the hell that means,’ laughed Big Sister.

Charlotte’s beautiful brow furrowed with concern. Did this mean that she may have to pay more for her various basic necessities, she wondered, like her gym membership, Me-pod uploads and boutique shopping? But the proclamation was continuing.

‘And the second top-scoring wish is . . .’ Big Sister hesitated, clearly taken aback. She could be heard in the background, whispering, ‘Are you sure this is correct? Yes?’ before returning to her script. ‘The other wish that’s been granted is that the entire MeGeneration has been voted out of existence, evicted from this planet! So to all you Me-Gens, thanks for gracing us with your presence and . . . GOODBYE!’

Charlotte saw several frumpy middle-aged women walking past, waving pleasantly in her direction. Then, in the next nanosecond, Charlotte disappeared forever.

Chuckling, the women continued their stroll along the beach.