A true story (unfortunately) about a trip home from Morocco, written by Liezl Shnookal 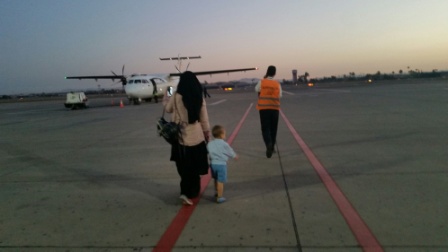 For those of you about to travel, I recommend that you don’t read this story.

After a month in Morocco, it was time for me to start heading homewards. I placed my luggage on the conveyer belt at the airport, and smiled at the woman behind Royal Air Maroc’s check-in counter. Although it was 3.30am in the morning and I’d had no sleep the previous night, I was happy to be leaving Marrakech. However the woman looked at her computer screen, shook her head and handed me a piece of paper with a phone number written on it.  “Cancelled” was all she said and then waved me dismissively aside.

Somewhat alarmed, I rang the number, to learn that indeed my 6.05am Royal Air Maroc flight had been cancelled. For almost two hours, I argued and pleaded with the person on the other end of the phone, until finally I managed to secure a seat on the 6.20am flight from Marrakech to Casablanca. I was extremely relieved. I was going to make my Casablanca to Abu Dhabi connection with Etihad, after all. Hurray! As I returned to the check-in counter, I smiled again, happily anticipating that wonderful moment at the end of my day and journey, when I fell into bed at Abu Dhabi’s swank airport hotel.

Clutching my precious boarding pass, I headed out onto the tarmac in the blistering heat with only a few other passengers. We hesitated. Which was our plane? Finally someone came to our rescue and pointed to one particular plane, an old one with propellers. Boarding, we were surprised to see a plane almost full of passengers, from Agadir. We took our seats. The lights went off, and then came back on. Three times. The engine started up, revved, and died. I began to feel nauseous. There were several more attempts to fire up the engine. It was clear that we were going nowhere in that plane and frankly, when they ordered us off, I was more than happy to oblige.

We were herded into a gate lounge and abandoned. No information, or assistance, was provided. Occasionally, a Royal Air Maroc staff person would become visible in the area and our self-appointed leaders would rush him to hurl questions, but to no avail. As time progressed, it became clear that there was to be no replacement plane and that all of us were going to miss our connecting international flights. Finally, after a particularly heated exchange with a staff member, my fellow “passengers” suddenly were on the move. I followed in hot pursuit. We passed some toilets and although I really needed to use one, I didn’t want to risk becoming separated from my stampeding mob. We were led through security, presumably to check that we hadn’t picked up a bomb on our stationary aircraft, and we dutifully but resentfully filled in our arrival forms as we queued at immigration counters to re-enter Morocco. We were then taken into an area where we were re-united with our bags. As we were waiting to go through more security, I managed to find another “passenger” who spoke some English. He informed me that there was a bus to take us to Casablanca. Really? A bus? Surely this was a joke!

After six hours of waiting to board a plane, I finally boarded a bus. For almost four hours I sat on this bus with a very full bladder, wishing that I hadn’t drunk the entire contents of my water bottle in order to clear immigration, many hours earlier. When we finally arrived at Casablanca’s airport, my need for a toilet was desperate, far more so than for any boarding pass. At least that problem I could easily rectify.

It took me some time to realise why I couldn’t find Etihad staff at any of the check-in counters - all of their flights had already left Casablanca that day. It took even longer to locate an Etihad office, which was hidden away at one end of a terminal. The door was locked but I could see several people inside. I knocked loudly, frantically. When a man answered the door, I managed to explain about the two cancelled flights and therefore my missed connection to Abu Dhabi, in between sobs. The man listened, kindly. There was a conversation with another Etihad staff member, a woman, and before I knew it, she and I were off – at a fast pace – back through the terminal. My heart leapt. Someone was going to help me sort out this mess. I was going to be okay. On the way, I quickly grabbed a bottle of water and a croissant – the first bit of food for the day. My saviour deposited me in a room for people with special needs, told me to wait and then disappeared.

I waited. Several times I saw my saviour walk past, and each time I flew out of the room to talk to her, eager for news. We were apparently waiting for the attention of a “manager”. As time went on, the room filled to bursting point and others needed my seat. So I took myself and my bag outside the room, and continued to wait, standing up. Another hour went by. Suddenly it dawned on me that it had been quite a while since I had last seen my saviour and so I returned to the Etihad office. Its door was still locked, but this time everyone had gone and the lights were off. I had been abandoned, again. I stood there, trying not to panic. I didn’t know what to do. For the first time in all of my solo travels, I wished that I wasn’t alone.

I walked aimlessly through the terminal, fighting hard against an irrational desire to flee, to escape the nightmare, and the airport. Not exactly a solution to my problem. Miraculously I managed to turn my brain back on, and remembered the “manager”. After a massive search, I located her – she was identifiable by the numerous, extremely irate people who surrounded her. I rested against a wall until there was a lull in the commotion before stepping forward to begin my story. The manager immediately interrupted; she knew who I was. Astonishingly, she was furious. “You MUST WAIT your turn!” she shouted. I found myself instantly returning fire. “No!” I yelled at the top of my voice. “I have already waited a long time and I will not wait any more.” She continued shouting, but I was louder. “I’ve had enough. I have to leave the airport immediately,” I screamed and started to walk away. Her voice screeched after me, “Be back at the airport at 6.30am tomorrow morning and go upstairs to collect a voucher for a hotel.” I turned around, shocked that it had taken her four hours to issue me with these instructions, but she had already turned to her next angry customer.

The hotel was disgusting, but initially I was so overjoyed to be away from an airport terminal that I didn’t notice. Also I did manage to find some food that wasn’t covered with flies at the buffet, and a fork to eat it with, plus I did catch up on a little sleep. So somewhat refreshed, I returned to Casablanca’s airport at 6.30am the next morning and with hope, loaded my luggage onto the conveyer belt at the Etihad check-in counter. The woman looked at her screen, then at me, and beckoned to a senior staff member. Eventually I was asked to step aside and wait. This time I wasn’t alarmed, I had been there before and besides, this time it was done politely. After an hour or so, I sat down on the floor and astonishingly, a seat was brought for me. Finally, an airline with customer service skills! I began to be optimistic about ending up with a seat on a plane, and making it to Abu Dhabi.

Time went on. A Moroccan man who was a fellow passenger on the Marrakech to Casablanca bus walked past and we greeted each other like long-lost relatives. When I told him that I’d had to scream at the Manager before I was given any information, he nodded. “That’s because Moroccans are like donkeys,” he said. “You have to hit them really hard before they will move.” For a month, I’d tried not to look at the little donkeys being mercilessly beaten and did not welcome this justification, or brutal analogy. I was relieved when an Etihad staff member came up to deliver some news, and my new friend departed.

Apparently there was no problem getting me onto the 9.45am plane from Casablanca to Abu Dhabi but the connecting flight from Abu Dhabi to Melbourne was completely full. I relaxed a little, now confident that at least I was going to get out of Morocco. I explained, again, that I had managed to rebook my Abu Dhabi hotel and would actually prefer to fly the following day. The man went off, to return fifteen minutes later, with a big smile on his face. I was to be given boarding passes. Royal Air Maroc had booked me all the way through, although the second flight was overbooked. I stared at him, confused. They were Etihad flights, and my previous ticket was with Etihad. I mentioned these facts, and that if the flight was overbooked, then I should be put on the next day’s flight. The man stopped smiling at me. He explained that the flights were full for the next three days out of Abu Dhabi, and insisted that it was Royal Air Maroc’s responsibility to provide me with tickets.

I stood up. I was no longer confused, I was angry, really angry. I began to shout. I told him that was complete bullshit; they were Etihad flights. That I didn’t want to go on two back-to-back long haul flights, with no food available for me to eat on either - because of the 48 hour notification rule - and with the uncertainty as to whether I even had a seat on the fourteen hour flight. I took a breath.  The Etihad staff member was speaking, insisting that there was no other option. I thought for a minute. Then I said, calmly and firmly, “I want an upgrade.” I sat down on my chair. The man tried to argue with me for a few minutes, saying that it was not up to Etihad, but I held my ground and kept repeating my demand. He scurried off.

Forty minutes before the flight was scheduled to depart, I was given two boarding passes. I had been upgraded for the second flight. It was a victory, but I deemed that I had already paid a heavy price for it. I went through security and rushed to my gate. Never before have I been so happy to squish into a seat on a plane and fasten my seat belt. As the plane took off, tears of happiness trickled down my face. Finally, I was leaving. Finally, I was going home.