Fireflies in the Darkness 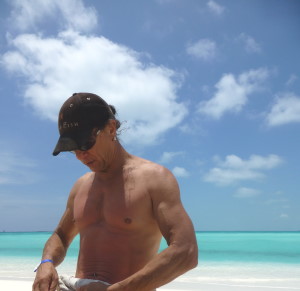 Matt was in my life for fourteen years. We began as work colleagues and at different stages were friends, lovers and travelling companions. During that time, I tried to understand who this man was, but he remained elusive . . .  except for one day when I caught a glimpse, unexpectedly, under an azure Cuban sky.

I met Matt when I was working in the Economic Development Unit at Darebin Council. I walked into the boardroom behind the grey-suited back of my manager and hesitated momentarily before I shook the newcomer’s outstretched hand. Was this man really a senior government executive? Certainly he looked like no other I’d ever met. His jet black hair was pulled behind into a long, thick plait that reached halfway down his back and he was wearing a pair of very prominent silver earrings. No suit and tie, just a plain black shirt and pants. I shook hands with others from his department, before returning to watch him as he greeted several Directors. Clearly at home in boardrooms, Matt invited everyone to take a seat before proceeding to seamlessly steer us through a discussion about the viability of an Indigenous traineeship program at Darebin Council.

I admit that I was dazzled by Matt, right from the start. Certainly I was in awe of his brilliance as a negotiator and strategist. And yes, he did have a megawatt smile that often rendered me speechless, mid-sentence.  But mostly I was disarmed by how kind he was to me. For even though Matt was responsible for managing a state-wide program and frequently in Canberra, he made time for one-on-one meetings with me. As a non-Indigenous person, I was struggling to find my way through the minefield of Indigenous politics and get agreement for a Council project from all the fractious leaders of the various Aboriginal communities. An Indigenous man himself, Matt helped me navigate a path. I often went into our meetings close to tears, but always left feeling reassured and with a new tactic.  When I changed jobs, we continued to meet, in part to discuss establishing an Indigenous traineeship program at Moreland Council, and partly as friends. In time, we became lovers.

However it was then that I hit a massive brick wall, although at the time I merely saw a series of hurdles. The confident, forthright and convivial man I’d come to know had disappeared and in his place, and in my bed, was a man who was uncommunicative and ill-at-ease. He no longer wanted to talk about anything other than his job. In reply to my questions, he would grudgingly disclose impersonal details about his life and no more. It was as if he were hiding some deep-down, shameful secret. His early years were particularly off-limits, and so I could only imagine what it may have been like for him, a young Torres Strait Islander boy, to leave his mother’s side on Magnetic Island, for the confines of a Marist boarding school in Cairns. I really wanted to get to know him, to understand him, but he seemed hell-bent on building road-blocks.

Disappointed, I gave up trying to have a relationship, and during the next decade, only occasionally contacted him. When we did meet up, Matt would always greet me warmly, but each time he firmly kept our conversation within the boundaries of his job and his increasing frustrations with the federal government. However, in January 2016, to my surprise, he mentioned that he was planning a trip to Cuba in May. As I too was organising a visit there, we both slightly adjusted our schedules so as to spend a couple of weeks travelling around together.

So one April morning I found myself with Matt on a Cuban beach called Playa Sirena, taking off my sandals under the shade of some palm trees. I laughed aloud as the powdery white sand stuck to my feet like some kind of cling wrap. It had been quite a journey, with a helicopter ride from Havana to the island of Cayo Largo del Sur the day before, and then earlier that morning, a shuttle bus and boat from our hotel. We made our way through the small cluster of sun loungers before beginning to walk leisurely along the beach, heading towards Playa Paraiso, supposedly one of the most beautiful and isolated beaches in the world. Within minutes, we were completely alone. The turquoise water sparkled under the hot sun, beckoning to us, and we quickly responded by dropping our backpacks, removing our clothes and wading in. The Caribbean Sea enveloped us in a warm salty hug and I noticed that Matt’s green sapphire eyes were twinkling with delight.

We dried off in our towels as we strolled along the shore. Matt stopped constantly to take photos, and seemed especially taken with the bleached driftwood. There were so many starfish to admire as well. At one spot the beach disappeared under a twisted tangle of vegetation but without a moment’s hesitation, Matt led me away from the water’s edge to a small track that passed through the dense scrub. We walked in single-file for a while. When the path became inundated with treacherous thorns, Matt showed me how to avoid them by scuffing my feet through the sand. He was clearly in familiar territory. Sometimes he pointed out a specific shrub, saying that it reminded him of a plant found in the Torres Straits.

Eventually it was possible to head back to the beach. We went in for another swim. I came out first and sat on my towel for a few minutes, watching Matt float on his back amidst the gently rippling sea. He looked so content. Grabbing my camera, I headed into the white foam of the shallows but my splashing alerted him. Matt turned to face me, flashed his megawatt smile and raised both hands aloft in a victory salute. I laughed and took the photo, before returning my camera to the safety of my backpack and rejoining him in the water.

We continued to saunter along the shoreline, hand-in-hand, and arrived at Playa Paraiso. It really was the most beautiful beach I’d ever seen. A sandbar stretched the length of the bay, separating a large channel of crystalline water from the sea. Just as I was about to step into the shallow canal, Matt stopped me. “Look,” he said and there, gently gliding just below the surface, were numerous stingrays. Horrified, I leapt back, much to Matt’s amusement. He began to tell me about the stingrays in the Torres Strait and exciting school holidays spent with his cousins. I listened to his stories, smiling happily to myself, as we made our way along the sandbar in the glorious sunshine.

I write this piece to pay tribute to the man who was Matt Nicholls. I feel enormously fortunate to have had that one special day with him, when we walked together along the beach to Playa Paraiso and waded into a turquoise sea. It’s a time that flashes and sparkles for me, like fireflies in the darkness.