A short story about searching for love, written by Liezl Shnookal 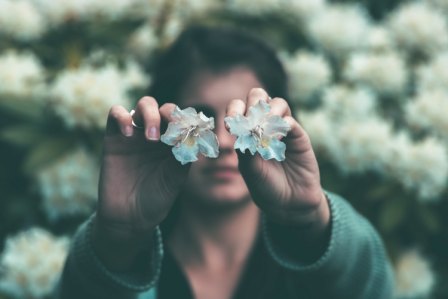 photo by Alex Iby on Unsplash

I opened the front door and there he was. Dark wavy hair that was slightly greying, broad shoulders inside an ironed shirt, and deep violet eyes. He stretched out his hand.

‘Hi,’ he said, flashing a sumptuous smile at me as our hands briefly touched. ‘My name’s Dan. I’m very happy to meet you.’

‘I’m Tessa,’ I replied and desperately hoped I wasn’t blushing. ‘Can I help you?’

‘Actually, I’d love to be able to help you!’ He raised one eyebrow.

There was a pregnant pause while we gazed into each other’s eyes.

‘Are you tired of coming home to a cold, lonely flat?’ he finally asked.

‘Are you ready for a change?’

‘Perhaps I could come inside to have a chat about this?’ he urged gently. ‘Maybe we can find a solution together?’

As I followed him down the hallway, I managed to restrain myself from leaping excitedly into the air. Miraculously I had finally found my man or, more accurately, my man had found me! It was exactly as my married friend Kate had said: visualise the kind of man you want and he will simply appear. And here he was, heading into my kitchen. However, five minutes later, we were back at the front door.

He was no longer smiling. I slammed the door and rang my friend.

‘Kate,’ I began and then, to my complete astonishment, burst into tears.

One Saturday night many years earlier, I tottered precariously on high heels across to the bar to buy some drinks, surreptitiously surveying the available talent on my way. I mentally noted a few possibilities before returning to Kate. She was no longer alone, so I quickly handed over her glass and wobbled back to the bar.

Perched on a stool, I located the prospects I’d previously earmarked. On closer scrutiny I discovered that one had his arm around another guy, a second had vanished, and a mob of women had moved in on the third. Ah well, I thought to myself, there are plenty more fish in the sea, as I retrieved a lipstick from the depths of my handbag and rebaited the hook. It wasn’t long before I got a nibble.

‘Hi there,’ a deep voice intoned. ‘Is this seat taken?’ I turned to find a rather overweight man grinning hopefully at me. ‘Do you mind if I join you?’

‘Of course not,’ I replied, reminding myself not to judge a book by its cover. Underneath the flab might beat a heart of gold and besides, I reflected, there’s always the gym. I smiled encouragingly and we introduced ourselves.

‘So tell me, lovely lady, what do you do for a living?’ Simon asked.

I suppressed a groan and determinedly pushed on.

‘I’m an equal opportunity officer,’ I replied. ‘What about you?’

Horrified, he leapt to his feet. ‘You’re one of those women’s libbers?’

‘And you’re a sexist pig?’ I retorted to his fast-disappearing back as he rushed into the crowd.

I sat for a few minutes, examining Simon’s abandoned beer on the counter. I reminded myself that trawling through bars was not guaranteed to yield the right catch immediately. I looked across at Kate, who was still engrossed with the same guy. At least it seemed promising for my friend that night. I sighed before ordering another drink, which I drank alone.

Many subsequent times, hope and loneliness pushed me out of my flat and back onto a barstool. Again and again I searched, but repeatedly the net came up empty.

Eventually I decided to try a whole different approach. I agonised over what to write for my profile on the internet dating site before settling on ‘Vegetarian unhappily adrift in the meat market’. I was surprised by the flood of responses. However, as I sifted through each one in turn, I became increasingly irritated. Why, I wondered, did so many men write proudly that they enjoyed ‘wining and dinning’, when this only served to expose a complete absence of imagination and their inability to spell? I rejected all advances without a moment’s hesitation.

But one day ‘Webhunter’ appeared through the ether. John ticked all the boxes; he was an ideal match for me in every way. He was vegetarian, articulate and different. He was engaged in the world, knew how to use apostrophes, ran a bookshop and cared about the people in his life. Amazingly, his photos showed that he was good looking. What more could I want? We embarked on a flurry of email exchanges before tentatively moving on to telephone intercourse. Boosted by a strong indication of compatibility and the urgency of our burgeoning relationship, we decided at last to meet. The bell of the bookshop announced my arrival as I apprehensively opened the door. John came to greet me, his brown eyes smiling and eager. We fell into conversation easily and naturally, as if we had known each other for a lifetime. I was utterly captivated.

‘Fancy a strawberry?’ John asked, proffering a plate with his left hand.

I glanced down and felt my stomach lurch.

‘They’re organic and I’ve washed them,’ he assured me.

But I grabbed the plate and flung it onto the table. Taking his hand in mine, I examined the indentation on his ring finger, the unmistakable sign of the recent removal of a wedding band.

John stood up, his face suddenly furious. ‘You have to appreciate that it hasn’t been a marriage for two years,’ he snapped. ‘My wife and I sleep in separate rooms. She no longer wants sex since . . . STOP! You don’t understand!’

But I had already galloped out the door.

On my way home, I visited my old friend Kate. I had made an important decision.

Toddler on her hip and baby vomit on her shoulder, Kate thought for a few moments before replying. ‘Good. Now you’re ready for him to simply appear.’

‘What kind of crap is that?’

But Kate just smiled knowingly to herself.

Three weeks later, I opened the front door and there he was. Dark wavy hair that was slightly greying, broad shoulders inside an ironed shirt, and deep violet eyes. He stretched out his hand.