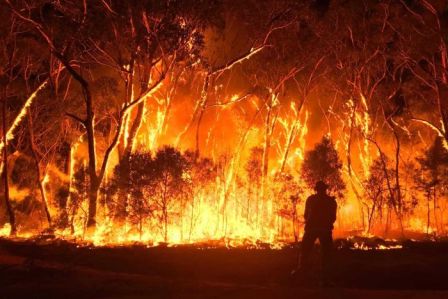 As the sun rises over Powertown, Tony Nero strides purposefully to his desk. The federal election has just been called and he is a man in waiting no longer. He locates his laptop, scans the headlines on screen, and groans. There are floods or bushfires in several key marginal seats, again. Why the hell, he wonders, can’t natural disasters be confined to safe Red Party electorates? Nero calls for coffee, then remembers that it’s too early for the girl to be at work. He sighs and begins a two-hour exercise program in the private gymnasium annexed to his office. It’s going to be a marathon race to the finish line and the seasoned veteran knows he needs to be in tip-top shape.

South of Powertown, Annie sits silently with her grief amongst the rubble and ash where her house once stood. In the dawn light she conjures up the face of her beloved husband of thirty-three years, who died trying to defend their property. The heat and wind had been so extreme and the fire so intense that he hadn’t stood a chance. Annie’s tears run down the crevices in her face and soak the front of her blouse. She wonders if she will ever be able to stop crying.

Meanwhile, north of Powertown, a family is already on task. It’s the second time in a year their home has been flooded, so they know exactly what to do. The oldest child gathers up sodden household items, while the younger ones wield mops. Fortunately there hadn’t been time to replace the carpet and so the parents roll the trolleys easily over the concrete slab as they move the furniture into two piles in the backyard – the salvageable and the completely ruined. They stop momentarily to commiserate with neighbours, but are soon back at work. Experience has taught them that there is no time to waste.

West of Powertown, Lord Corbulo is addressing a breakfast convention of thirty top business tycoons in his colonial castle. ‘Extreme weather events? Bah, humbug!’ he mocks. ‘We all know there’s no such thing as climate change.’ The tycoons tuck into dishes of caviar and pig-in-a-blanket, with much clinking of silver spoons on gold fillings. Corbulo finishes his speech and winks at Gina Stoneheart, his patron, who then lumbers to her feet to bellow, ‘The Blue Party will put a stop to this nonsense when they’re elected!’ She gestures towards the bank tellers who have appeared in the room, as if by magic, urging her fellow plutocrats to give generously to the campaign – she expects donations of no less than six figures apiece. ‘After all,’ Stoneheart reasons, ‘it’s an investment in your future.’ The industrialists willingly oblige, united in their desire to get rid of the wicked witch of the south-east and her despicable tax on carbon.

Back in Powertown, but on another day, Julia Caesar is rallying the troops in a meeting room. She has important news to impart. With the imminent departure of a few trusted generals, she wants to announce the Red Party’s fresh line-up to the rest, before the media hears about it. Naturally, the unions have already been informed. Everyone seems pleased with the reshuffle and Caesar returns to her office to continue strategising. She summons her chief adviser to ask how she is faring in the latest opinion poll. The adviser gives her the thumbs down, but says that her new glasses are receiving a lot of positive media attention.

A long distance away from politics, across a considerable breadth of sea, Aleki comes out of his beachfront shack into the glorious Polynesian sunshine. Hand in hand with a couple of small grandchildren, he walks to the water’s edge and examines the shoreline anxiously. It’s his daily ritual, now. One child asks if today is the day they will have to leave, and with a shake of his head, Aleki quickly reassures the little boy. Yet he is aware that the ocean is advancing up the beach towards his home and eventually he will have no choice but to shift his family off the island to safety. It is simply a question of when. Aleki stands for a minute more, gazing over the turquoise sea, before heading back indoors with his grandchildren.

Meanwhile, on the forty-fourth floor of a city office tower, Tom Waterhome studies an enormous scoreboard, crosses his arms and scowls. No matter how many betting commercials he runs across the networks, the odds for the election remain frustratingly static. It’s a one-party race and everyone knows it. Tom sighs, then consoles himself with the thought that there is another, much more important event in September. He knows that he can count on footy fever and the Grand Final to bring in his usual pot of gold.

However, in a faraway sea that is nowhere near the rainbow’s end, a polar bear clambers frantically onto an island of ice. Her young cub has just drowned, unable to swim the distance between icebergs. The polar bear’s head slumps onto her paws and she immediately falls into a deep, exhausted sleep.

But all is not lost, for a new and yet familiar protagonist enters the fray. Kevin Brutus comes to the rescue of the Red Party, brandishing the less toxic Emissions Trading Scheme to offset his own methane production over the last few years, and manages to depose Julia Caesar from the top job. She embarks on a more feminine position of authority – inside her family’s inner circle – while other women are promoted to higher auxiliary roles within the party. Tom Waterhome is back in business, as are the major polluting industries.

Eventually Election Day dawns, unusually warm for a spring day. At a small suburban polling booth, a voter stands perplexed as he wipes his sweating face with a handkerchief. ‘Why can’t I see Tony Nero and Kevin Brutus on this?’ he demands as he stares at his ballot paper. ‘And who are these other clowns?’ The Australian Electoral Commission employee, accustomed to this question, patiently explains that voters get to choose their local member of parliament, but not their prime minister. The man is dumbfounded by this, yet nevertheless returns to his cubicle to make his selection from those on offer.

Tony Nero wins the election and the Blue Party assumes control over Powertown. With the climate debate now over and with sponsors to repay, Nero becomes an even more devoted captain of industry. ‘Extra subsidies for all,’ he announces into the microphone, as he stands on a platform with his team of fossil fuel company executives. A man steps out of the crowd, demanding to know about subsidies for renewable energy businesses. Nero explains that he is unveiling the economic growth plan, not the environmental policy, but the interloper persists, saying that the renewable energy industry has huge employment potential. Tony Nero loses his cool. ‘Don’t be ridiculous!’ he shouts. ‘There are no jobs in that! Go back to your cave, you hippie!’

In the meantime, Sally realises that she has only fifteen minutes before she has to leave for work. A mother of three small children, she rushes to gather up all the toys from the floor, checks to see if her unwanted couch has sold on eBay and quickly hangs out a load of washing. ‘Hey,’ Sally calls out to the workmen installing the solar panels on her roof, ‘do you want some coffee before I go?’ They decline and she hurries inside to find her youngest child sitting on the toilet. She promises to give him a treat for doing a poo and is rewarded by the most unpleasant smell imaginable. Sally is delighted, adding up how much she’ll save from not having to buy nappies, as well as her reduced electricity bills now she has solar panels.

But at the end of the day, as the sun sets across Australia, an old man shuffles down a lane in Carbonvale. He stops and leans his back against the high chainmesh fence that surrounds the local coal-fired power station. Behind him, massive chimneys discharge dense columns of pollutants into the air. However the man is oblivious; he has other things on his mind. The government has again increased its tax on tobacco, so that the price of cigarettes has skyrocketed even higher. The old man glares angrily at the packet he has just bought, before extracting a cigarette and lighting up. ‘Bloody nanny state,’ he mutters aloud, fed up with the government restrictions that make it almost impossible for him to smoke. Meanwhile, close to where he is standing, copious amounts of carbon dioxide billow freely into the atmosphere from the power station’s chimney stacks. The sun continues to sink slowly through the smog. After a while the old man finishes his cigarette and resumes his journey along the narrow little street in Carbonvale, finally fading from sight in the gloom.